Where does Santa come from? 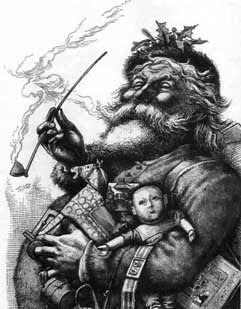 FOR MOST of our readers Santa is the product of rampant capitalist propaganda and spin, invented to persuade workers, especially those with children, to spend more than they can afford on extravagant gifts and then spend most of the following year working harder than ever to pay off the debts.

Some may have noticed that this character is not quite the same as the old English Father Christmas. Santa definitely arrived from the United States at sometime in the middle of the last century, on his traditional sleigh pulled by reindeers and is entirely benevolent to children. He is based very loosely on Saint Nicholas, a Turkish saint who rescued orphan children.

Father Christmas is an altogether older, darker and more mysterious figure. He does not just bring gifts but also punishment for wrongdoers and he presides over a very chaotic time of year when the old certainties are, for 12 days, swept aside, for a festival of fun and anarchy.

Father Christmas was then also known as “The Lord of Misrule” or, in Scotland, “The Abbot of Unreason” and he brought a time when the lower classes defied the rules and regulations imposed by the upper classes and when masters had to wait on servants – and it was a time notorious for drunkenness and excess.

The Father Christmas figure is associated with ancient pagan nature religions that celebrated an annual cycle of crop growing and animal husbandry, where each year the cycle of light versus dark, summer versus winter, day versus night played out an endless dialectic that governed the working lives of the people.

Many of these religions had a god, like the Egyptian Osiris, who represented the corn they sowed. This god often took the form of a human god-king who achieved that office through a series of contests in physical and magic skills to marry the hereditary queen of the community.

He would be sacrificed annually or at regular intervals and buried. These gods always rose again from the dead as the corn rose after being buried in the fields – and a new god-king was chosen to replace the old.

The annual solstices were critical points, especially the winter solstice when the darkening and shortening of the days was suddenly reversed; when light had decisively won the battle over dark. It was a revolutionary point and a time of upheaval and chaos and rejoicing – when almost anything could happen.

Perhaps the oldest of the pagan gods that we know of associated with time of year is the ancient Greek god Chronos – often depicted as an old man with a white beard. To those who worshipped him he represented time itself. His followers recognised that time creates all things and eventually destroys all things – the dialectical principle of constant change. Chronos was said to eat his children. This can be interpreted as Victorian artists did, of a monstrous figure devouring real children, or it can be interpreted as an allegory that time eventually consumes everything.

The Roman god Saturn has been identified with the Greek Chronos and he presided over a 12-day festival in ancient Rome which included riotous feasting and drinking and, in households that observed the festival strictly, master waiting on slaves.

It was a time to remember the old agrarian village that had once been Rome, a time of primitive communism when “no man was master and no man slave” and “no one’s work was a burden” and when “no lines were drawn on the land” to mark out property boundaries.

Saturn was definitely a sun god and his triumph over darkness was a time of joy and freedom – and chaos. He was identified with Sol Invictus – the unconquered sun.

Saturnalia was a time of general relaxation, feasting, merry-making, and a cessation of formal rules. It included the making and giving of small presents (Saturnalia et Sigillaricia), including small dolls for children and candles for adults. During Saturnalia, business was postponed and even slaves feasted. There was drinking, gambling, and singing, and even public nudity. It was the “best of days,” according to the poet Catullus.

These nature gods, with their links to the annual agricultural cycle and their understanding of dialectics – and seasonal sacrifices – were later swept away; Zeus conquered his father Chronos as Jupiter did to Saturn. These gods, along with the Jewish Yahweh, declared themselves eternal, immortal and unchanging. They were the gods of people who owned property and upper class status and wanted to hang on to them for all time. These new gods hated uncertainty, chaos and anarchy.

Another Roman god strongly identified with Father Christmas was Mithras, who began in Persia as a god of the Zoroastrian religion. This was a dialectical nature religion – which is still practised today. It centres round an eternal flame, which of course is forever changing.

The Mithrasmas festival was celebrated on his birthday, 25th December (The Persian god Ishtar was also supposed to be born on 25th December). Mithras was popular among Roman soldiers. There are conflicting versions of his birth. Some say he sprang from a rock, others say from a tree. But another popular version says that Mithras was born of a virgin on December 25th in a cave, and his birth was attended by shepherds; he was considered a great travelling teacher and master and he had 12 companions or disciples.

Mithras’s followers were promised immortality; he performed miracles and as the “great bull of the Sun,” Mithras sacrificed himself for world peace.

He was supposedly buried in a tomb and after three days rose again and his resurrection was celebrated every year. Mithras was called “the Good Shepherd” and identified with both the lamb and the lion.

His worship moved from Asia Minor to Europe at a time when there were many wandering preachers who claimed to be “the Messiah” and to be able to perform miracles. It became strongest among Roman soldiers reaching a peak at around 200 to 250 AD. And it was a religion full of dark mysteries and initiation rites as practitioners rose through seven stages from outer to inner circles.

It does indicate that among the soldiers the attachment to dialectical nature religions remained strong in spite of Jupiter’s claims to eternal and unchanging immortality. They preferred a religion that gave hope of change in society and status.

Emperor Elagabalus (218–222AD) introduced the festival of Mithras, and it reached the height of its popularity under Aurelian, who promoted it as an empire-wide holiday.

But it was a religion that could not last – it was a strictly men-only religion and some argue that its elitist traditions deterred many. Sextus Julius Africanus popularised the idea that Christ was born on December 25th in his Chronographiai, reference book for Christians written in AD 221.

By the fourth century the Roman Emperor Constantine adopted Christianity as the main religion of the empire. He called a conference of Christian sects that was held at Nicaea where the final form of the New Testament was determined – with four gospels included and about a dozen other versions left out – many had been written long after the events they describe and their accuracy was disputed.

The Council of Nicaea was also a very political event; Constantine was a master of political spin who had broken with Rome’s traditional religions and philosophies but he did not want to endorse a religion that would challenge his authority on earth.

The celebration of Christmas as a Christian festival took off in Europe under the domination of the Frankish King Charlemagne. He fought many wars against pagan Teutonic tribes in what is now Germany and cut down their sacred tree groves.

But the sacred tree survived there in the form of the decorated Christmas tree, a tradition later brought to England by Queen Victoria’s husband, Prince Albert.

It also echoes the Anglo-Saxon winter solstice festival of “geol”, or Yule, with the well-known Yule log. Yule logs were lit to honour Thor, the god of thunder, with the belief that each spark from the fire represented a new pig or calf that would be born during the coming year. Feasting would continue until the log burned out, which could take as many as 12 days.

The prominence of Christmas Day increased gradually after Charlemagne was crowned on Christmas Day in 800. Around the 12th century, the remnants of the former Saturnalian traditions of the Romans were transferred to the 12 days of Christmas (26th December – 6th January).

Christmas during the Middle Ages was a public festival, incorporating ivy, holly, and other evergreens, as well as gift-giving.

Alas the midwinter festival we now “celebrate” every December has been well and truly taken over by the capitalist god Mammon.

But, as communists and subversives, we should encourage it to be remembered as a time when the social order can be turned on its head and slaves can become masters and enjoy themselves.
Posted by london communists at 4:36 AM