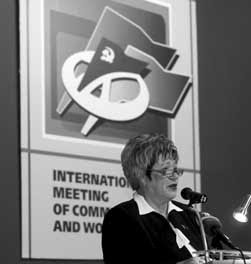 COMMUNISTS from all over the world celebrated the 90th anniversary of the Great October Socialist Revolution last week in a series of events that started in Minsk and ended in a massive march through the streets of Moscow.
Eighty communist and workers’ parties including the New Communist Party of Britain, from over 60 countries attended the 9th international communist conference in Minsk, the capital of former Soviet republic of Belarus, to discuss the relevance of the Russian revolution in the 21st century. NCP leader Andy Brooks and Richard Bos from the Central Committee took part in the three-day event, which was supported by the ruling parties of China, Cuba, Democratic Korea and Vietnam.
Leaders of the Communist Party of Belarus said the conference was of great significance because Belarus was where the first congress of the Russian Social Democratic Workers’ Party took place in March 1898. The congress established the Marxist party of the Russian proletariat, which played a decisive part in the success of the October Revolution. Now Minsk is the capital of Belarus, the only former Soviet republic which still has a progressive government committed to the welfare of the masses and the only former Soviet republic where the anniversary of the 1917 revolution is still a public holiday.
In the years that that followed the counter-revolution and break-up of the Soviet Union pro-imperialist revisionist and nationalist “reform” politicians formed a government committed to capitalist restoration that plunged the country into corruption, hyper-inflation and chaos. That was halted by the mass movement that defeated the reactionaries in the 1994 presidential elections and took Alexander Lukashenko, a Belarusian leader from Soviet days, to power.
Supported by the communists, the Lukashenko government has renovated the agricultural and manufacturing base which remains in public ownership. Belarus is now a “socially orientated market-economy” with free education and healthcare, virtually full employment, vibrant industries and collective farming that has made the country a major food exporter in Europe.
The conference began on 3rd November with the laying of flowers at Lenin’s monument and the monument to Victory in the Great Patriotic War against Nazi Germany followed by an official welcome from President Lukashenko. The communist forum reviewed the significance of the historic event in Russia in 1917, as well as current trends in social development, and exchanged points of view on the pressing issues internally and externally affecting one another’s countries. And on the last day the delegations visited four state-owned factories and farms to see the progress being made in Belarus with their own eyes.
On 5th November the international delegations departed by night-train to Moscow to take part in the celebrations organised by the Communist Party of the Russian Federation (CPRF). Life for working people in the Russian capital is far different to that of workers in Belarus. Though the Putin government has curbed the worst excesses of the worthless Yeltsin regime and it is safe to walk the streets of Moscow, at least in daylight, there are still plenty of beggars along streets full of shops packed with goods only the chosen few can afford.
Delegates visited the Lenin Mausoleum in Red Square and joined CPRF supporters for an October celebration in the columned hall of Moscow’s historic House of Unions. There it was clear that achievements of Lenin and Stalin had not been forgotten by the applause whenever their names were mentioned by speakers, including CPRF First Secretary Gennady Zyuganov and Soviet cosmonaut Svetlana Savitskaya, the second woman in space and now a CPRF MP in the Russian parliament, the State Duma.
Finally on 7th November they joined tens of thousands of Russian communists for a march through Moscow in sub-zero temperatures that ended in a rally addressed by Gennady Zyuganov and other leaders. Russia is in the throes of a national election that Vladimir Putin’s “United Russia” bloc is predicted to win. The CPRF, which has 45 members in the State Duma, is fighting to retain and expand its share of the seats.
This was the biggest communist demonstration in Moscow since 1993 and indeed the biggest of any kind in the Russian capital in recent years. The police put the numbers at over 40,000 but many participants thought it was much, much bigger.
As the rally ended with the Internationale, comrades from all over the world could see that the communist movement is alive and well in eastern Europe – defending the gains of the working people of Belarus and marching on the streets demanding change in the heart of Putin’s Russia.
Posted by london communists at 3:14 AM