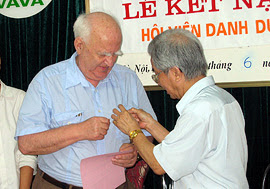 THE VIETNAM Association of Victims of Agent Orange/Dioxin (VAVA) held a ceremony on 12th June to admit Len Aldis, secretary of the Britain-Vietnam Friendship Society as an honorary member.
Len Aldis expressed his pleasure to join the association. He stressed that the active efforts of VAVA helped to attract increasing concern from people at home and around the world about the consequences of Agent Orange and its serious effects on the environment and people in Vietnam.
“Supporters of Agent Orange victims find VAVA a good way of expressing their concerns and raise aid to help them,” he said.
Len Aldis, 76, first came to Vietnam in 1989. Since then he has carried out many activities, even “more active than many Vietnamese people” as noted by VAVA Vice President Nguyen Trong Nhan, to help Agent Orange victims in their daily lives and in the struggle for justice.
He is the author of a website petition, which is designed to collect signatures of those who want to support Vietnamese Agent Orange victims.
Nguyen Trong Nhan said that it would take a long time to list the initiatives worked out by Len to support the victims.
Len has visited colleges in Britain, giving speeches and showing films about Agent Orange victims in Vietnam. He has also mobilised British MPs for support towards the victims.
His website petition http://www.petitiononline.com/AOVN/ has been signed by over 700,000 people around the world, much more than expected. This shows that his patience has helped many people to gain an understanding of Agent Orange and its serious consequences.
Len is the founder of the Britain-Vietnam Friendship Society which since its foundation in 1992 has, and will continue with its work and projects in raising awareness and funds for the Vietnamese people, especially those suffering from the effects of Agent Orange. BVFS campaigns seeking justice for the victims of Agent Orange has led to Len Aldis being invited to speak at a number of universities in Britain and in Vietnam. He has also spoken on the issue at public meetings in Sweden, Denmark, Germany, France and Vietnam.In addition, the Society has shown international award winning documentary films on Agent Orange such as Battle’s Poison Cloud and Path to Justice in which Len appeared. Another film Agent Orange, a personal requiem” by Masako Sakata, has recently been released as has The Last Ghost of War by an American company, Janet Gardner Group.
Posted by london communists at 2:12 AM